For an Integral Age Slovenia

Harmful energies from the earth

Geopathology is a science that deals with the study of pathologic (sickening, harmful) energies emitted from the earth that interfere with the healthy functioning of cell metabolism in our body. Geopathic Stress mainly occurs from natural sources, but can be caused, as well, by man-made electro-magnetic devices and applications such as cell phones, computers, power lines, etc.

European Science has researched this topic for nearly a century and provides important insights about the significance on longterm and chronic health challenges.

Underground water courses (or water veins) emit an energy that is draining our body’s bioenergetic field and can be harmful if a person is spending long periods of time above those areas. It makes no difference how deep the water is down in the earth or how many floors a person lives above ground. Even on the 20th floor of an apartment building the effect can be clearly felt, sometimes even stronger due to the enhancement of iron in reinforced concrete in the ceilings.

If your bed happens to be right over an underground water stream, your sleep will likely be affected. It might take you a long time to fall asleep or you’ll toss and turn all night. Waking up between 2 and 3am is typical, too, since Geopathic Stress reaches a maximum at this time of the night, especially with full moon. Getting out of bed in the morning then feels impossible. Babies and small children often fall out of their beds instinctively trying to avoid the Geopathic drain. They wake up several times at night or come into their parents’ bed.

Earth grid systems consist of straight lines or paths of Geopathic energy. In fact they are more like energetic walls, go deep into the earth, but also reach miles above the surface. They are referred to as “cubic” because they are three-dimensional.

The idea that some spots on the earth werebetter than others for people to live has been around for thousands of years.In fact, the ancient practice of Feng Shui has a lot more to do with finding anenergetically optimal place to build a home than with where to hang windchimes, place a mirror, or set a pair of porcelain love birds to enhance the”relationship corner”.

Old European traditions still describe scenarios where a herd of sheep wasobserved before a house was built. The spot where the sheep bedded down for thenight would be the best area, specifically for the master bedroom, as it wasfree of Geopathic Stress.

The first notable study in recent history was conducted by GustavFreiherr von Pohl, a German aristocrat, in 1929. Freiherr von Pohlconducted an experiment where he dowsed a whole small town, Vilbisburg, forGeopathic Stress. He was accompanied by a policeman to insure that he did notask questions of the town inhabitants. The results were then taken to the townmayor who compared the results with the town doctors’ records of patients withcancer over the previous several years. The results produced a 100%correlation between cancer and Geopathic Stress. The experiment wasrepeated in larger and smaller towns with always the same results – 100%correlation. Naturally, those involved thought they had found a cure forcancer, but unfortunately, WW2 broke out, and the academics scattered and theknowledge was lost – for some time.

DOWSING is the art of locating energies or energetic changes which are not accessible through our usual senses. A dowser often uses a tool or instrument to help him indicate subtle changes in space, on a property or with people.

Anyone can learn how to dowse and with some practice get reliable results. Early history mentions dowsing in ancient Chinese writings, as well as in the Bible. Today oil companies, the army and many water drilling businesses rely on dowsers for locating the location and depth of oil, underground structures and water. In Europe dowsing is widely used in alternative medical practices as a way to determine personal responses to herbs, homeopathics and supplements including finding the right dosage.

A short history of Dowsing

Dealing with invisible forms of land energies and measuring their influences is nothing new. For centuries, the knowledge of the forces of nature have been an integral part of life in farming or even in mining for minerals.

In the Bible, the rod which Moses knocked on a rock and water sprang out as of a fresh fountain is an example of the ancient use of a dowsing rod.
The Chinese Emperor Kuang Yu is portrayed with a dowsing fork. The inscription reads: “Yu of the Hsia Dynasty was a master in the science of the earth and in those matters concerning water veins and springs.”
The Egyptians had sophisticated pendulums and instruments to heal, preserve and use. Extensive research into the Egyptians’ use of such tools was carried out by French dowsers, of whom one of the most famous is Abbe Mermet.

Dowsing as practiced today may have originated in Germany during the middle ages, where its use was documented in the finding of metals. The technique later spread to England by German miners who went there to work in the coal mines. 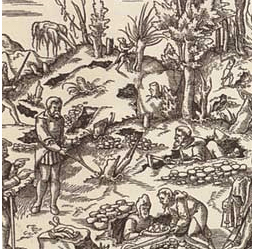