Open learning environment for all generations

Memory of the Earth

Two trees in one

Heritage through perception, discovery and creativity

About the book : Ronnie Lessem and Alexander Schieffer’s Integral Green Society and Economy series has three overarching aims. The first is to link together two major movements of our time, one philosophical, the other practical. The philosophical movement is towards what many today are calling an ‘integral’ age, while the practical is the ‘green’ movement, duly aligned with that of sustainable development. The second is to blend together elements of nature and community, culture and spirituality, science and technology, politics and economics, thus serving to bring about an ‘integral green’ vision, albeit with a focus on business and economics. As such, the authors transcend the limitations to sustainable development and environmental economics, which are overly ecological, if not also technological, in orientation, and exclude social and cultural elements. Thirdly, this particular volume, with Darja Piciga, focuses specifically on Slovenia, as well as on Europe generally, drawing on the particular issues and capacities that this country and continent represents, particularly for sustainable development and social knowledge-based economy.

The emphasis on Slovenia arose, not only because it lies at the heart of Europe, but because a specific movement for an Integral Green Slovenian Society and Economy, has been co-evolved there, by the three editors in conjunction with Slovene organisations, communities and movements, with a view to integrating existing and emerging knowledge resources, initiatives and practices into a model, as an alternative to austerity, for Slovenia and other European countries.

From Geomancy to Integrated Development  :

Robi and Karin Lavin, illustrate via our Anima Mundi Center for Integrated Development how to work with the vital energy elements of landscape : introducing an innovative development model for generating various forms of sustainable development, taking into account the vital energy properties of the physical space and in cooperation with different professions in a spirit of environmental and social responsibility.

Informed by Integral Economics Lessem & Schieffer, 2010) as well as thereafter Integral Development (Schieffer and Lessem, 2014), a foundational framework was found, that served to help the initiative to articulate a uniquely holistic Slovenian perspective.

The Integral Economics model has its starting point in its centre, in the moral core of a society (Figure 1). In their own research Lessem and Schieffer uncovered how vital it is that the outer economic system of a society is in resonance with its inner moral core, or indeed moral cores. They argue that a society needs to begin its process of integral economic development by securing â€œsouthernâ€ nature-based economic self-sufficiency, before it focuses on the other â€œeasternâ€, â€œnorthernâ€ and â€œwesternâ€ economic functions. Thereafter it needs to respectively include the building up a culture-based developmental economy (ensuring that the economy is aligned with the cultural evolution the society), a knowledge-based social economy (aligning its socio-economic structures with technology-driven knowledge systems) and a life-based living economy (reconnecting finance and economic performance measurement to natural and human wellbeing). 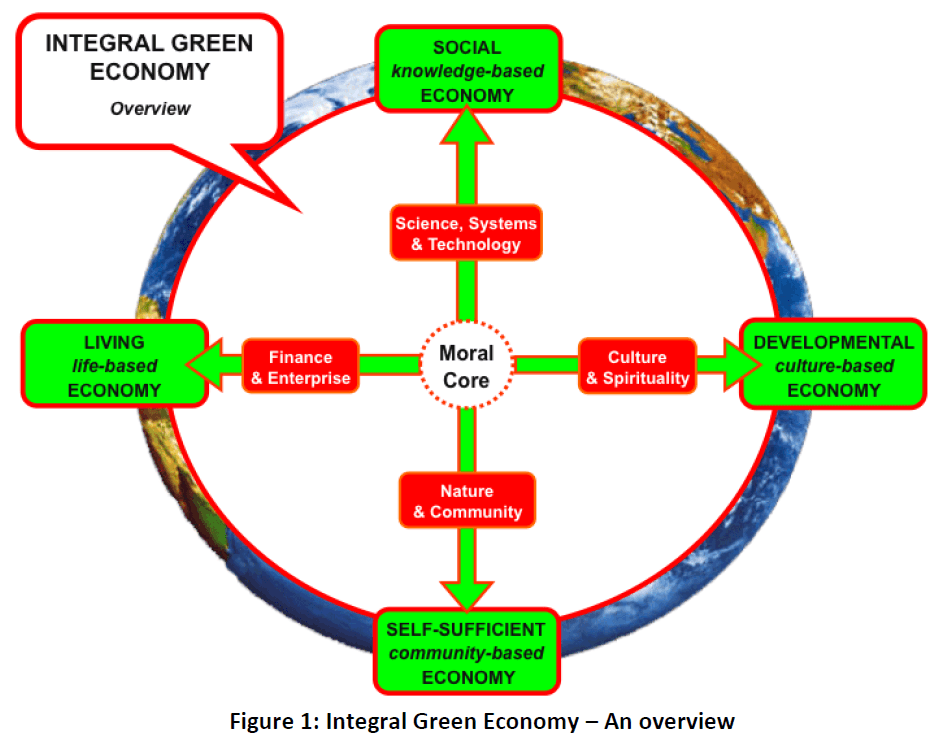 Together with the authors and their Geneva-based institute Trans4m Center for Integral Development (www.trans-4-m.com), and also drawing upon a number of internationally renowned role models, in theory and practice, a new Integral Green Slovenian Economic perspective gradually evolved over the next four years. Two international conferences, held in Slovenia, together with several national events involving participantsâ€™ discussing, comparing, and evolving new integral economic and social innovation theory and practice, further fuelled the process (e.g. Piciga, Kranjc, 2015). (more information on www.dpiciga.com and https://integralna-zelena-slovenija.si/).

From Slovenia to Europe, from Europe to the World:

Surely, it is no coincidence that we are concluding this volume shortly before the global summits on sustainable development goals and climate change that are supposed to bring the necessary break up with the unsustainable economic and social models from the past. That is indeed the task at hand, and we need viable alternatives to turn to.

Challenging the existing economic paradigm can no longer be philosophical entertainment. It is one of the most urgent tasks at hand for humanity.

In the spirit of our integral approach to economics and development it is important that different worlds recognise the need for unity-in-variety. Such unity requires each society to connect to and strengthen its own underlying value base, its moral core, and to build socio-economic systems that are aligned with such a value base. Furthermore, in the light of an emerging global humanity facing dramatic common challenges, each society is called to actively explore ways of opening such moral core to the value base of other societies â€“ thereby contributing to local-global unity-in-variety.

It is in this spirit that Slovenia, geographically located at the heart of Europe, is aspiring to play its role in enriching and evolving the â€œheartbeatâ€ of Europe, sharing its own integral potential â€“ its nature, culture, science and economy â€“ in a sustainable manner with Europe, and with the world.

It is in this spirit that Integral Green Slovenia has been conceived.

It is in this spirit that our Citizensâ€™ Initiative for an Integral Green Slovenia is seeking to contribute to Slovenia, to Europe and to the world â€“ in the form of a future role model for a sustainable.